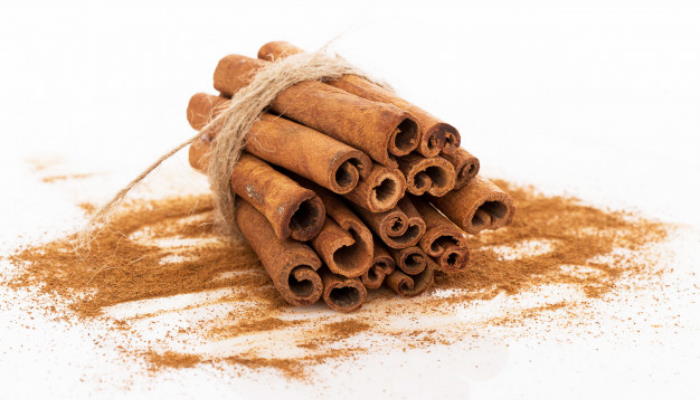 
Cinnamon is a spice widely used in the Ayurvedic medicine, it combines very well with sweet flavors (cappuccino, fresh fruit, confectionery preparations, baked pumpkin or pumpkin velvety) but also in bitter coffee (or sweetened with stevia) and savory dishes.
To give it the typical strong and pungent smell is cinnamic aldehyde.
Several studies have shown the ability of cinnamic aldehyde to produce catecholammine (adrenaline above all) and to slightly increase energy expenditure.

Among the properties of cinnamon there is that of being a powerful antioxidant, properties conferred on it by the substances contained in it such as epicatekines, phenols and tannins.

Taken constantly, cinnamon helps modulate the body's response to incoming glucose through a meal and helps improve nutrient partitioning.
When you say *improve partitioning* of nutrients you intend to try to direct them more towards muscle tissue and less towards adipose tissue (to put it very simply).
Cinnamon can be considered a real Carrier: it is not only a thermogenic and hypoglycemic but is a carrier because it improves the presence of GLUT on cells.

You can use this spice in abundant quantities in carbohydrate-rich meals (sweet or even salty) or before refills or before metabolic or volume workouts or before cardio workouts to increase energy expenditure.

Date its characteristics, there are many benefits of cinnamon and in fact it can be very useful for:

To enhance its effects, it can be combined with other very efficient supplements:

Very useful combinations in cyclic protocols when you want to maximize the use of glucose by the body.
They are also anti-inflammatory substances (i.e. substance able to modulate an excess of oxidative stress in our body).

How much cinnamon to use?

The minimum amount of effective cinnamon is one teaspoon of coffee per day (about 1-2 g). The ideal is to take an amount equal to 4-5 g per day (about a teaspoon), perhaps cyclically (with breaks of 1-2 weeks).

When you buy cinnamon make sure it is a quality and organic product (if it is to be taken daily and in abundant quantities we must guarantee a good product).
If you have the chance, prefer Ceylon Cinnamon, maybe in splints.
Ceylon Cinnamon is the only real cinnamon! Higher beneficial properties, higher content of essential oils, has a delicate and sweet aroma (cassia cinnamon is stronger and pungent), low in coumarins (an excess involves digestive and liver discomforts).

How to recognize a good cinnamon?

It is not enough to say Cinnamon! There must be the scientific name or definition of Ceylon or Cassia or:

What if it says only "Cinnamon" without specifying anything?
In these cases it is almost always Cassia Cinnamon (which is more widespread and economical).