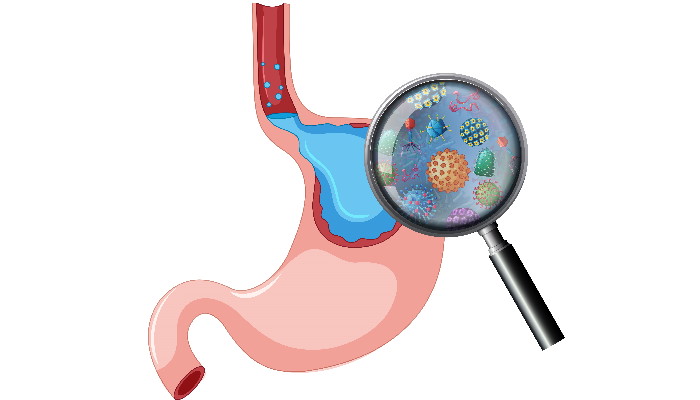 
Helicobacter Pylori is a curved gram negative bacterium that manages to colonize detric mulch despite the very acidic pH of the stomac creates a generally hostile environment for bacterial growth.

Our stomac, in fact, through the production of hydrochloric acid by some specially used cells, the sysyptic cells (or pariethals), has the role of making food safer, eliminating the possible presence of pathogenic bacteria that we could introduce with nutrition. The bacterium Helicobacter Pylori on the other hand, manages to survive in these extreme conditions of detric acidity and, thanks to some adaptation mechanisms, manages to create around it an alkaline microenvironent that protects it and allows it to colonize and proliferate at the gastric mucosa. It often hides from the immune system of the host organism by penetrating into the gastric cells themselves.

This bacterium is the main responsible for Gastritise of ulcer (both gastric and duodenal), because thanks to its spiral shape and the presence of flagella it manages not to be passively transported from the shallower layer of gastric mucus and to reach the deepest, least viscous and mobile part, penetrating the tissue. In addition, H.P. produces substances that recall the mediators of inflammation, causing an inflammatory state that in most cases becomes chronic. All this can lead to the degeneration of the epithelium and an increase in acid secretion.

The most common Symptoms are burn or pain in the upper part of the stomach and at the abdominal level if the ulcer is duodenal, digestive difficulties, nausea and spolytroesophageal reflow.

About 50% of the population has Helicobacter Pylori and its infection is more frequent than is thought but, only in some cases, can bring problems. Those affected must first follow medical therapy with antibiotics and pump inhibitors (under prescription). Therapy is essential since it is now known that cases of chronic H.P. gastritis not treated or neglected, can also lead to the onset of stomach cancer,

Nutritional therapy should be aimed at avoiding certain foods that increase the secretion of gastric juices, which exert pressure on the stomach favoring gastric reflux.

They must be avoided

the coffee, also the decaffeinated one, the tea, the alcohol, the carbonated drinks, the spices, especially the Spicy too, the fried foods, and in general the very fatty foods, but also the overly sugary ones, canned foods, sausages and cheeses and smoked foods. In addition, you should avoid making unique and abundant meals to avoid further irritating the mucous membrane. In fact, it is useful in repartmentally to divide the diet into several meals that is, dee a little and more often,

There are some foods that can help relieve the pain caused by ulcers due to Helicobacter pylori, listed below:

- Bananas: an antibacterial substance that can slow the growth of H. pylori is present in bananas. Research shows that eating bananas produces more mucus in the stomach and helps create a barrier between the lining of the stomach and digestive acids. Bananas also tend to help you get a thicker stomach wall.
- Kale: drinking a liter of raw cabbage juice helps heal ulcers in just five days according to research. Raw cabbage juice is not the only healthy option. Studies show that eating cabbage helps the stomach heal faster. You can add raw cabbage to your diet in salads and sandwiches.
- Carrot coat: carrots are rich in vitamin A, which helps heal the lining of the stomach and protects it from unwanted and harmful microorganisms.
- Cayenne'spe: consumed in moderation, cayenne pepper is useful in the fight against ulcers. It stimulates the blood, thus increasing the nutritional intake for the stomach. A good recipe to follow is mixing a quarter teaspoon of cayenne pepper in hot water or tea to consume every day. You can also add a pinch of cayenne pepper to the food you consume.
- Elm bark: the elm bark helps soothe the mucous membranes that protect the lining of the stomach. It is often used in powder and herbalists suggest adding a teaspoon of elm bark powder to a cup of hot water and drinking the mixture three times a day.
- Garlic: Garlic contains antibacterial properties that help fight Helicobacter pylori. Use two daily chopped cloves together with garlic to gain greater benefit.
- Licorice: several studies have shown that eating liquorice helps in the healing of ulcers as it contributes to decrease the acid capacity of the stomach to damage its lining. Do not exceed consumption as liquorice increases blood pressure.
- Plums: Purple and red foods prevent H. pylori from growing. Most berries are also good fruit options to include in your diet.

In general they are recommended: fruits and vegetables, which with their alkaline power can counteract acid hypersecretion, vegetables, such as potatoes, and legumes. Yes to unsaturated fatty acids, omega3 and omega 6, since they are precursors of prostaglandins that regulate the inflammatory process with protective effects towards the mucous membranes, especially gastric ones. An integration of Vitamin C and Zinc is also recommended, as these substances help repair the damaged epithelium. It is also important to increase the consumption of fiber, since people who carry out therapies with ancids could have the side effect of Constipation.

Another advice is to schew very slowly to promote digestion, because as we have said, when we are in the presence of an ulcer digestion is not carried out appropriately by the stomach, and the food remains coarse in size. Therefore it is important to favor a predigestion, at the level of the mouth, through a long chewing.