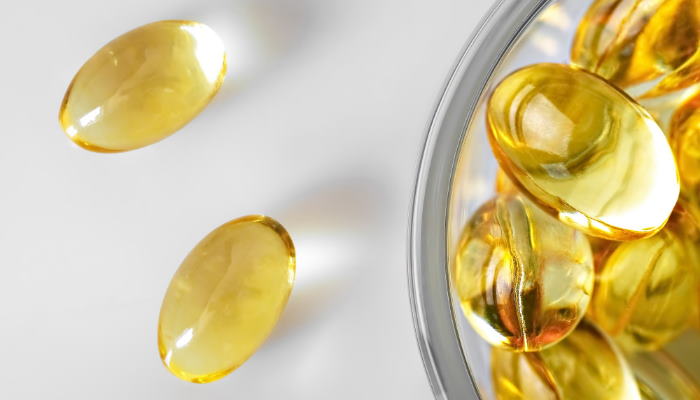 Omega 3 are polyunsaturated fatty acids derived from alpha linolenic acid that are divided into two types of derivatives: eicosapentaenoic acid (EPA) and docosahexaenoic acid (DHA).
These are fatty acids that are defined as essential because our body is not able to synthesize them independently. This involves the need to take them through food and, where necessary, through the help of supplements.

The essential fatty acids (EFAs) in total are eight but, in the strict sense of the term, only two are NOT synthesized by our body: linoleic acid or LA (omega-6) and alpha-linolenic acid or ALA (omega-3) and, therefore, must necessarily be taken through nutrition and / or supplementation. In addition to performing several important functions for the body, they are also precursors of other essential fatty acids:

- Arachidonic acid (AA) which is the main of the omega 6 series synthesized from linoleic acid
- EPA and DHA (two omega 3 PUFAs) synthesized from alpha-linolenic acid and can be mutually converted thanks to the action of certain enzymes.

Both arachidonic acid and EPA and DHA are precursors of eicosanoids (prostaglandins, leukotrienes and thromboxanes) or molecules that act at the endocrine level and play a fundamental role in the inflammatory process. Specifically, eicosanoids deriving from arachidonic acid (omega-6) have pro-inflammatory effects while those synthesized from omega-3 have a minor inflammatory effect, in some cases neutral, in other cases even have an anti-inflammatory action. Therefore, with the production of eicosanoids from omega 3, compared to that from omega 6 (both competing for the same enzymes), there is a lower platelet aggregation and, consequently, a lower mortality rate for thrombosis in populations that eat foods containing omega 3.


EPA and DHA perform different functions and their properties are manifold:

- Ensure that cell membranes remain healthy, functional and efficient even in the function of communication and permeation
- Anti-inflammatory role
- They are precursors of Resolvins and Protectins which, in turn, are powerful anti-inflammatory and "protective" molecules
- Role of prevention and treatment of cardiovascular diseases and dyslipidemias; they are important components of cell membranes and, their integration, helps to improve the lipid profile
- Antiarrhythmic action at the level of the myocardium (prevention and correction of abnormalities) and protective in the wall of blood vessels through the production of thromboxanes derived from EPA and the increased production of vasodilation factors
- Therapeutic role in combating the viral action of some viruses affecting the respiratory system
- Therapeutic role (as adjuvants) in autoimmune systemic diseases
- EPA is able to regulate the blood supply to the brain, DHA is fundamental for brain membranes and cognitive functions
- Prevention and treatment of injuries to muscles and joints

Let's remember, however, that stress and inflammation IN ACUTE are positive factors: they induce adaptation and subsequent improvement. In sports, oxidative stress and an increase in inflammatory markers is part of the adaptation process (which also leads to protein synthesis, increased strength and mitochondrial biosynthesis).
The problem is when the situation becomes chronic.
To control the inflammatory state of the body it is essential not so much the amount of essential fatty acids introduced, but the relationship between them: the ideal ratio is

You must first control the consumption of omega 6, only then you increase the omega 3!

Modern nutrition with the consumption of packaged foods, even apparently healthy, tends to make this ratio increasingly unbalanced in favor of omega 6 (it reaches almost 12: 1). In similar contexts, as a first step, there is no need to increase the intake of omega 3 but it is first necessary to modulate that of omega 6 (especially those deriving from processed and industrial foods). If inflammation is taking place, this ratio can be temporarily unbalanced in favor of omega 3 (also with the help of specific supplements).


The main plant sources of omega 3 are: flaxseed and oil, chia seeds, walnut oil, wheat germ oil, hemp oil, nuts, etc. It should be noted that these foods are rich in ALA, a precursor of EPA and DHA, whose endogenous conversion requires several steps and may be insufficient. And that's not all! It should be remembered that the omega-6 content of many of these foods (especially dried fruit) is high. The omega 3 contained in plant sources are also more predisposed to the process of lipid peroxidation ("rancidity" of fatty acids) because the preservation of these foods exposes them more to light, heat, oxygen.

Some microalgae, on the other hand, are particularly rich in EPA and DHA (for example the Klamath and Schizochytrium varieties) but, given the difficulty in fresh consumption, it is more suitable to resort to their use in the form of supplements. But watch out for the origin! The best are the Breton ones, better not to prefer Japanese algae or those surroundings (cause Fukushima disaster).

Omega 3 of animal origin, on the other hand, are mainly found in fish oils (salmon, sardine, herring, cod liver), in fatty fish (especially wild ones, not those from intensive farming) and small blue fish (mackerel, anchovies). Omega-3s derived from fish are already rich in EPA and DHA and, therefore, do not have to undergo further conversion steps.

The supplement is useful especially for those who are not lovers of fish or for those who live in areas where it is difficult to find fresh fish caught with constancy and for all those who follow a vegetarian or vegan diet.
Integration, however, must also be done with criteria.

Which Supplement to Choose?

The product must have a certification (for example IFOS but there are others equally valid) and the EPA/DHA ratio must be at least 60% of the content (with a prevalence of EPA compared to DHA). It is also important to check the contents per single capsule.

The minimum dosage to significantly affect an inflammatory process is at least 2 g / day of EPA + DHA (speaking in general) then dosages and timing are to be customized according to the individual, the context (diet, training, lifestyle and possible presence of pathological or para-physiological situations).

As for the vegan sources of Omega 3, an even more useful supplement could be the one based on microalgae but other sources can also be fine: for those who have been vegan for some time, there is an adaptation by the microbiota and the body and, therefore, there may be an improvement in the efficiency of conversion of ALA into EPA and DHA.

Daily supplementation can be exploited in a clinical setting, in case of severe dyslipidemia and hypertriglyceridemia. Obviously, in addition to supplementation, it is also advisable to improve the quality of nutrition and introduce exercise appropriate to the individual.

It is preferable to take them together with a meal and, usually, away from training. Post-workout, as already mentioned above, it is normal that there is oxidative stress and increased inflammatory markers: this is what causes the body to adapt and, in later times, improve. The intake of antioxidants and anti-inflammatories post-workout is not very useful except for some exceptions and particular situations.

Attention! Supplementation is absolutely not recommended in case of taking anticoagulant drugs and pathologies affecting the blood clotting processes.

In conclusion, omega 3 is an important part of a healthy and balanced diet (but not the panacea for every evil as suggested by someone). It is not enough just the diet and the correct ratio between omega 6 and omega 3! With a view to health and prevention, it is good to practice physical exercise consistently and pay attention to other factors such as stress management, sleep care and hygiene, time optimization, breathing exercises and much more.