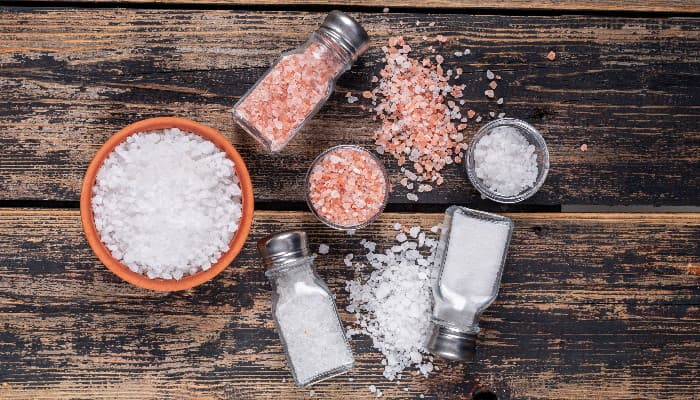 
Salt is a very present element on Earth, both in the environment and within living organisms. It is found both in the natural state, in the form of Sea salt or mineral salt, and in various industrial products and within the human body, present in the quantity of about 250 grams. It is Not to be understood only "kitchen Salt" but also that contained naturally in all foods of the diet, especially in preserved foods.

Chemically is sodium chloride salt (NaCl), consisting of 40% Sodium (Na) and 60% Chlorine (Cl). Sodium chloride is a natural source of one of the basic flavors and always appears in the kitchens and on the tables as an essential condiment in every culture and in every time. An adult human being contains about 90 grams of sodium, which is the main ion in extracellular fluids and participates in a large number of physiological processes. Instead, chlorine abounds mainly in liquids inside cells. Both are essential for our survival and the safety range related to their needs is 0,575-3.5 grams/day for sodium and 0.9-5.3 grams/day for chlorine, corresponding to about 1.5-8 grams/day of sodium chloride. Difficult to experience a shortage of these Salts, on the contrary there is often an excessive intake: in Italy The average consumption of salt is 12-15 grams/day, decidedly higher than the values considered safe (it should not be considered only the simple Salt used as a condiment at the table but also the so-called "Hidden salts": bread, pizza, sausages, packaged or pre-cooked products, ready-made soups, nut...)


Salt on The Market

Once the only kitchen salt known by the average customer was the Classic white salt "big or up" (normal or iodized), nowadays in all supermarkets you can choose also according to color, characteristics, shapes of crystals.
The various salts differ in the content of other substances (trace elements other than chlorine and sodium) that can impart particular colour, taste and aroma to the product, with variations of the sodium chloride content that can go from 85% to 99.9% of the total weight.
Very often these trace elements are associated with curative properties that are not entirely founded by inducing unskilled consumers to abuse it (the consumption of salt, whatever it may be, must be modest).
The characteristics of the crystals, the different and peculiar colours, the aromas and flavours, naturally present or added, make certain types of salt suitable to finish with taste in the kitchen.

The Colors of the Salt

Rose Salt of The Himalayas is the most known type, it is a salt-bud from the mines of The Himalayas is one of the most pure forms. In The east it is always used by virtue of its properties and, since the years ' 90, also in the German naturopathy.
The crystals are large and make it very useful for gaskets and food processing, with an immediate and direct impact on taste. The gourmet of the salt state has a delicate and floral scent, for sure the crystals are crispy and tasty on carpacci, salads and dressings.
In Addition to its use in the kitchen the pink salt can be used in cosmetics, for a scrub rich in minerals, rubbing the grains on the skin helps to remove dead cells, such as bath salt (promotes circulation and then fights cellulite) or to Inhalations in case of colds.
Among the trace elements present we find (we always talk in traces of contents) Iron oxides (which according to folklore imparts the pink coloration) and appreciable quantities of potassium, magnesium and calcium. The sodium chloride is found around between 96 and 98%, very similar quantities to the common refined salt that is on the market.

Red Salt is a sea salt obtained by evaporation and, during processing, Mixed With Alaea Rouge, a volcanic clay rich in iron: It has a ferrous aftertaste and a slight aroma of toasted hazelnuts and is typically used For grilled fish and meat. It has a sodium chloride content that can fall below 90% (therefore lower than the common salt).
If activated charcoal is used in the processing process instead of red clay you can get what is called the "black Salt of Hawaii".

Black Salt is one of the most used by vegetarians, it is a rock salt rich in iron, magnesium and various sulfur compounds including sodium sulfate, iron sulphide and hydrogen sulphide that give a very special smell of Boiled egg. The Mineral, greyish, is mixed with activated charcoal and a mixture of aromas, warmed and then re-shredded until obtaining violet-rosé crystals.
It is said that the use of black salt, due to the presence of activated charcoal, improves the symptomatologies of abdominal swelling, intestinal gas and may also be useful as a mild detoxifying and in case of irritable colon (but also in this case it is granny without Well-founded studies).
In India It is appreciated for the particular flavors that it gives to vegan dishes like tofu, mixed with yogurt or sprinkled on sweet fruits like melon, watermelon and mango.
It is a typical finishing salt, always added at the end of cooking. It tastes more delicate than the common salt, but a lesser melting, in fact the grains remain crunchy. It Can present toxic amounts of fluoride.

Sal Gris is produced in the South Of Great Britain, on the atlantic coast French, in clay sediments deposited along the coasts. In particular, the area rich in saline is concentrated in the village of Guérande (meaning white country, precisely because of the presence of the salt pans), from which also the name Grey Salt of Guérande. It is obtained with the technique of solar evaporation and hand-picked, so it does not undergo any processing, it is a raw salt. It is a raw sea salt, rich in magnesium, slightly damp, which allows to resist without melting completely even on damp foods, to be added at the end of the cooking, particularly suitable for dishes based on vegetables but also for Meat and fish. It Has a rich flavour conferred by the Dunaliella Salina seaweed, present in the Atlantic waters.

The Blue Salt of Persia a natural rock from the Mines of Iran. It is a very rare salt and the characteristic colour is due to the presence of Silvinite, a potassium chloride with a characteristic blue colour (but often also yellow or pink). It is rich in addition to potassium also magnesium and calcium and chlorine.
Very salty on the palate with a slightly spicy aftertaste, it is excellent on grilled meats and roast, fish, vegetables, potatoes and as a very colourful gasket. It has a little lingering flavor though.

It is a raw salt, produced in the south of France, it is rare and prized. It Is also called "Salt caviar", much appreciated by the best chefs from all over the world.
The Salt flower is a very expensive salt is not refined, it is hyposodic, with thin and irregular crystals that dissolve gently on the food, mainly used to finish and garnish in particular raw or steamed vegetables.

The sweet Salt of Cervia

Salt of Cervia, also called "Sweet Salt", is an integral sea salt that maintains the possession of its natural humidity, has medium-fine crystals and is rich in trace elements such as iodine, zinc, iron, magnesium and potassium. Also Known as "Salt of the Popes" on whose tables abated.
It is often used to aromatize meat and fish but is often used also for preparing cakes or biscuits given its delicate flavor.