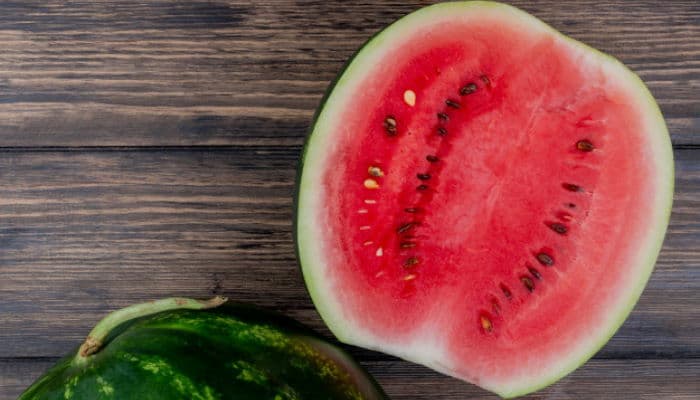 The watermelon is a bit like ice cream: it is synonymous with summer! A thirst quenching, refreshing, satisfying and... calorie! Composed of 90% of water in which many important mineral salts are dissolved. In particular 100g of watermelon bring about 110mg potassium , an important mineral for all cells and, in particular, for the nervous system and for muscle contraction. The watermelon could safely replace after a workout the commercial supplements rich in sugars and dyes, is an excellent substitute for the classic supplements of commercial mineral salts (said and restores the glycogen reserves since it contains High absorption sugars) However, it is poor sodium (another important mineral for recovery) so an ideal post workout could be composed of a portion of watermelon only after consuming a food with salted components (raw ham , Bresaola, egg whites, a crostini with salmon...). The positive side of sodium deficiency is to promote diuresis and purification of the organism.

In addition to potassium and other mineral salts (magnesium, manganese, selenium, phosphorus, calcium) important to combat fatigue and fatigue typically due to high temperatures, watermelon is rich in antioxidants and carotenoids (important for the system Immune) and vitamins such as Vitamin A, B1 (thiamine), B2 (riboflavin), B3 (niacin), B5, B6, vitamin C, and E. Moreover, it is rich in lycopene: A antioxidant substance and as such has anti-inflammatory properties useful in the prevention of tumors, prostate for men and breast for women. His activity has also been linked to the health of the heart and bones.

The watermelon is a low-calorie fruit: it contains about 17 kcal per 100g of weight. Most of the energy is given by simple sugars and in particular by fructose (for 100g of watermelon there are well 2g of fructose).
A slice of watermelon weighs well over 100g so you can get to a high amount of simple sugars (even 30-40g!) . If these then add up all the other sugars that are taken over the day (from sucrose and honey used to sweeten the hidden sugars and naturally contained in foods such as fruit) it is likely to exceed the limit set by the lines Health food Guide. Today the consumption of sugar is very high and it is not only for the table. The so-called "hidden sugars" are everywhere, from pre-cooked products, to industrial foods, ready-made sauces, etc.

All this to say that the watermelon is an excellent food but, as with all fruits, you can not make an abuse. The phrase the watermelon is just water, you can eat as much as you want! "It's a classic! There is no person who has not said it at least once. And instead No... even in this case it takes moderation especially if you are on diet slimming or you have problems with diabetes and insulin resistance. Often the people on a diet in the summer, take advantage of the satisfying effect of watermelon to replace it with a real meal (for example to the sea) but a portion abounded of this fruit is completely counterproductive for the line.
An excess of watermelon can also be detrimental to those suffering from irritable bowel problems or water retention: precisely because rich in sugars these induce fermentation and release of gaseous molecules that cause abdominal tension and discomfort.

In conclusion, for the watermelon is worth the same last that you make for any type of food: Yes, but with moderation and in right doses!