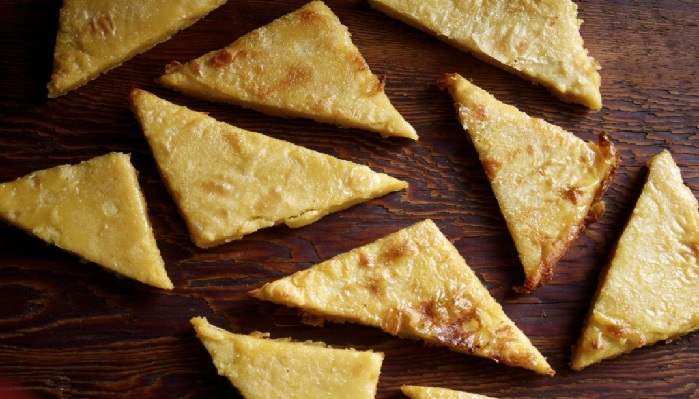 The chickpea gruel (or Fagg) is one of the most simple and known recipes and has very ancient roots (it is even spoken of Greek origins). It is a typical dish of Liguria (Italy) (it is here that assumes the name of Fagg) but spread in different areas of the Mediterranean. It was once considered a poor dish, an alternative to bread, later revalued thanks to the nutritional properties found in chickpea flour. There are also pre-cooked versions ready to heat, but they are rich in preservatives and additives and often there is the addition of sugar so, as always, it is preferable to prepare it at home as it is very simple and does not require long preparation times.

Dilute the chickpea flour and the water with a pinch of salt in a bowl (add the little water at a time stirring well with a whip and being careful to avoid the formation of lumps in the dough). Let the mixture rest in the refrigerator for a period ranging from a minimum of two hours to a maximum of one night. After the rest period, with a spoon remove the foam that has formed on the surface and add a pinch of salt and pepper or any other spices of your choice (the quantity is personal, according to taste).
Pour the dough into a baking pan covered with baking paper (or in a previously oiled non-stick baking dish).
The original recipe is cooking in a wood oven but an electric oven is also good.
Preheat the oven to the maximum possible temperature (250 °c or more) and for the first 10 minutes cook the flour on the bottom of the oven; The last 5-8 minutes you have to move it to the center of the oven to make it cook better in the center and to brown the surface.
Cooking depends a lot on the type of oven used and its capacity, if the dough is not able to cook well, then use a quantity of water below that of the doses indicated so that it is more dense.