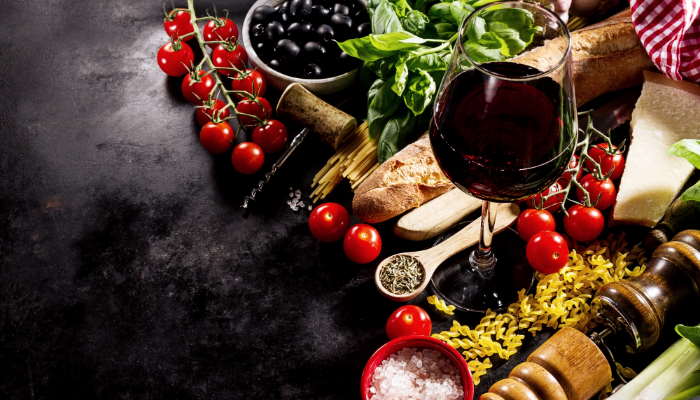 The word Mediterranean diet comes from the Greek δίαιτα which means "way of life", and this is precisely the correct interpretation: the DIET is a real lifestyle that "embraces every moment of our day". When we talk about diet we often tend to make the association with restrictions, allowed and not allowed foods, good foods vs bad foods, light foods and salads but, in reality, when we talk about diet we refer to a series of healthy and sustainable habits in the long term. So the term "diet" does not only mean nutrition but refers to lifestyle, physical activity, rest: these are the fundamental components that must never be neglected.

The scientific world agrees in recognizing only one diet par excellence able to guarantee physical and mental well-being: the Mediterranean Diet! A source of pride for Italy!

History of the Mediterranean Diet

The first to talk about the Mediterranean Diet was the American biologist and physiologist Ancel Keys who noticed, during a trip to southern Italy towards the end of the Second World War, a greater life expectancy and a lower incidence of cardiovascular diseases among the populations of the Mediterranean basin. In the typical tables of the USA and, in general, of the different urban cities where well-being reigned and the tables were richly laid out, dyslipidemias, heart attacks and strokes were constantly increasing.

In the late '50s, the Seven Country Study was initiated: a longitudinal epidemiological study directed by Ancel Keys in what is now the Laboratory of Physiological Hygiene and Motor Sciences at the University of Minnesota. It is an observational cohort study, begun in 1958, to examine the relationships between lifestyle, biomarkers and heart disease. The countries involved were USA, Holland, Finland, Italy, Greece, Yugoslavia, Japan, with 16 different groups followed over time.

Among the results of this enormous work that has involved numerous professionals in the sector all over the world, it has been seen that the typical diet of the Mediterranean countries and Japan is correlated with a reduced incidence of cardiovascular diseases and with a reduced mortality from several other causes (always associated with lifestyle). Keys was the first to identify and recognize this lifestyle by defining it as the Mediterranean Diet.

On November 16, 2010 in Nairobi, Kenya, UNESCO inscribed the Mediterranean Diet in the representative list of the intangible cultural heritage of Humanity, recognizing this heritage belonging to Italy, Morocco, Greece and Spain! Since 2013, Portugal, Cyprus and Croatia have also shared the honour.


Characteristics of the Mediterranean Diet

On the Mediterranean Diet there is still so much confusion among people; there are those who tend to think of a list of precise foods, those who have percentages of macronutrients to be respected and then there are those who think that this type of diet is simply equivalent to eating bread, pasta and pizza.

More than "diet" it is good to talk about the Mediterranean Model since it is much more than a simple list of foods or nutritional table but, in fact, a lifestyle that goes far beyond just nutrition. There is no mention of specific foods (with the exception of extra virgin olive oil) given the important dietary differences of the different countries included in this model. In general, a good consumption of extra virgin olive oil, legumes, cereals, fruits and vegetables are positive as well as a good consumption of fish and a moderate consumption of milk and dairy products. On the other hand, high consumption of red meat and animal fats has a less positive value. Obviously, it is the excesses that are not positive.

This Food Model can be summarized with the famous food pyramid: 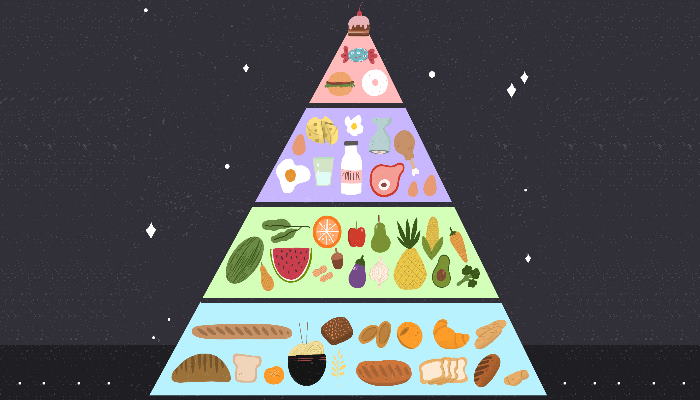 The food pyramid is divided horizontally, from the base to the top, into different sectors: each contains various types of foods and the size of the sector is indicative of the frequency/relative amount with which they should be consumed for a complete and balanced diet. As for quantity and doses, they are to be customized according to the needs of the individual. Even in the same individual the needs can change over time based on internal and external factors.

At the base of the pyramid we find fruits, vegetables and cereals / whole grains / in grain or those foods to be consumed more frequently and in greater quantities.

The III International Conference of the International Interuniversity Center for Studies on Mediterranean Food Cultures (CIISCAM) held in Parma ended with an update of the food pyramid that involves the lifestyle of the adult population aged between 18 and 65 years.

At the base of the new pyramid we do not find foods but important messages and habits that concern THE BASIS of lifestyle:

- PHYSICAL EXERCISE: movement is a determining element for health. There is no necessarily talk of training in the weight room with intense workouts for 4-5 times a week or even doing long marathons; we talk about active lifestyle, walking, moving and activating the muscles whenever there is the possibility. Movement should be a natural and innate habit for the human being. Sedentariness is one of the first risk factors for an unhealthy lifestyle and long-term pathologies.
- LOCAL AND SEASONAL PRODUCTS: it is important to prefer foods following seasonality and local products. This allows greater savings, eco-sustainability and respect for the planet, support for the work of small producers, more flavor and health (seasonal fruits and vegetables have a higher content of nutrients and better nutritional properties).
- CONVIVIALITY: the table is also a "social" moment, of sharing, meeting, exchange of opinion and mutual knowledge. It is not only important what you eat but also how.
- VARY: vary colors, flavors, combinations.
- FRUGALITY: that is a certain temperance in eating and drinking (alcohol is meant) of which very little is said. A close correlation between frugality, calorie restriction and longevity was noted. It must be said, however, that, in the current era, it is difficult to be satisfied with "the little available".
- DRINKING WATER: it may seem obvious but for many it is not so. The correct amount of water to be taken in the day is on average 30 ml of water per kg of body weight. The quantities can vary according to physical exercise, ambient temperature, subjective requests.


In conclusion, from what has been written, it is clear that the "Mediterranean diet" is not to eat bread, pasta and pizza several times a week and not even a list of foods to prefer.
It is a lifestyle that takes into account several factors that support well-being at 360 degrees.
The secret of this model (for health, prevention and longevity) does not lie in using a certain food rather than another, it is not in the search for some secret and magical ingredient: we talk about the general picture and the context in full.

Lifestyle must change in its entirety.