Protein, intended both as a food and as a supplement, has always been a very controversial issue; they have long been demonized especially in the clinical and wellness fields. Over the years, a lot of awareness has been raised to limit the use of proteins: in particular proteins of animal origin and protein powder (which is also right if we think of some clinical situations) but there are many false dogmas that have taken hold in the mentality of people starting from damage to the kidneys to an increased risk of cancer and so on.
On the contrary, in the world of fitness and in particular in power sports they have always been highly sought after (sometimes even too much, more than the real needs), because the goal is to be "aesthetic" and performing and, to do this, it is necessary to build muscle mass.

Effects of proteins on health

Anything can hurt, if in excess (food, nutrient, training, work stress). The question is to establish the extent of this "excess".
In the context of health and weight loss, we can talk in particular about different benefits of proteins, found in practice but also confirmed by the scientific literature:

- Positive effect on hunger / satiety: a good protein content allows longer gastric emptying times as well as satiety (and energy) even away from the meal. And that's not all! There is a direct effect of proteins on the hypothalamus (the brain structure responsible for evaluating information coming from the periphery including signals of thirst, hunger, satiety). More protein in the diet causes you to eat less. (Johnston AM et al.)
- Slight increase in energy expenditure and thermal effect of food: by convention it can be said that proteins have the same kilocalories as carbohydrates, or 4 kcal / g, so why increase them in conditions of caloric deficit? Because it's not just a matter of calories! Every food has a certain stimulus on the body. The processes of induced thermogenesis are greater when taking proteins. (NB: this should not be translated as "to lose weight you have to eat only proteins and eliminate carbohydrates" or with "proteins make you lose weight". This is not the case).
- Maintenance of an effective immune system: protein malnutrition, inadequate protein-energy intake and micronutrient deficiency, reduces the immune response: the functions of "barrier" and non-specific defense are the most affected and, consequently, there is greater susceptibility to infections. There are studies that have also shown a lower response to vaccination in malnourished subjects, with mineral deficiencies and protein malnutrition (PEM protein-energy malnutrition).
- Protective role against muscle: this is the most important effect of all. Any dietary path, regardless of the objective (aesthetics / health / performance), must have as its objective the maintenance (or improvement) of lean tissue. You should always have a muscle-centric vision, that is, focus on improving or maintaining muscle mass.


The importance of Muscle Mass

When it comes to "Muscle Mass", many tend to turn up their noses: several women, still today, associate it with a purely masculine aesthetic, or different boys or adults of different ages feeling "increase muscle mass" widen their eyes and they point out “but I don't want to get big”.
In short, with the term "muscle" most immediately think of a certain type of aesthetics: the big gym or the bodybuilder with large and defined muscles.
The confusion is absolutely understandable! Despite so many studies available, there is never enough talk about the effects of muscle mass on health. We should also talk more about it from a clinical and preventive point of view, among doctors. The role of muscle tissue is still very underestimated, both in health and disease conditions.
Having a muscle-centric vision, advising to do physical exercise, advising to increase or protect muscle mass is not only important for sports or to have a "beach physique", but it is important for the general PHYSIOLOGY. 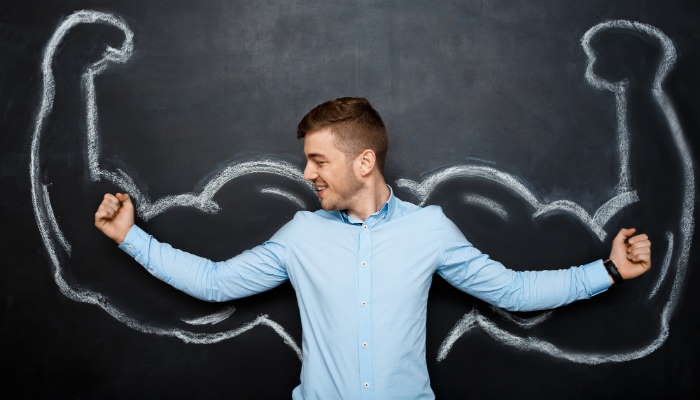 Having muscle means being healthy!

Muscle is more than just tissue! Muscle is an organ in all respects and has great responsibility towards the whole organism: it produces substances capable of modifying the way our body reacts and responds to stimuli (just think of some molecules such as IL-6, IFG 1, FGF 2, irisin). In general, the presence of the muscle means a decrease in the risk of chronic diseases and premature death due to factors generally related to "only" physiology.
In the context of slimming, having more muscle mass is useful for losing weight and staying in shape longer as it allows you to have greater flexibility of the metabolism.
Therefore, the increase in muscle mass must be desirable not only in sports subjects or those who need to lose weight but also in sedentary subjects, the elderly, people with walking problems or actual bed rest. Functional sarcopenia has a domino effect on the immune system and overall health.


How do you gain muscle mass?

The "natural" way is with nutrition and exercise! Then there are hormone therapies (but that's another story)
Nutrition is the main way, especially for those people who have no way of training in a certain way and for those who already live in functional sarcopenia (elderly people first of all).
There are several studies that show an improvement in strength, immune system function and quality of life in these subjects by improving the amount of protein in the diet, especially essential amino acids.
For these reasons it is not desirable to underestimate the daily protein requirement, but neither should we fall into the error of exaggerating and exploiting proteins as the main substrate for energy purposes. It's not convenient.

How Much Protein to Take?

As always, personalizing your nutrition plan is important.
Current dietary protein recommendations are based on the nitrogen balance technique that establishes the minimum amount of protein required to maintain nitrogen balance.
There are different reference ranges that vary according to different contexts:

- Optimal range for sedentary: 0.7-0.9 g/kg (up to 1.3 g/kg in case of low calories - Soenen et al.)
- Optimal ranges for children and adolescents: 0.83 g - 1.31 g/kg, depending on age (EFSA data)
- Pregnant women: small surplus in the first and second trimesters and + 30g each day during the third trimester
- Lactating women: surplus of 19-25g each day during the first months of lactation.
- Optimal range for athletes and athletes: variable according to further contexts.

As for sportsmen, it is also important to consider the type of sport carried out. According to the ISSN we can have differences in revenue based on these three types of sports:
- Power sport
- Endurance sport
- Mixed sport (team sports, some categories of athletics, crossfit)
Two other fundamental parameters to establish the range of proteins are given by the training phase (there will be more or less intense phases both in endurance and in power sports) and by the other two macronutrients. For example, the increase in protein through diet or supplementation can be taken into account in a context of weight loss when reducing energy intake (from carbohydrates for example).

In literature there is also a lot of discussion about the female universe in sports. For women, the ideal protein quota is around 1.7-1.8 g/kg of protein per day, sufficient for muscle building and maintenance. This share, of course, can increase or decrease depending on the conditions and needs.

Proteins in elderly or bedridden or pathological subjects with sarcopenia risk

In this context, it may be enough to introduce a small amount of protein at each meal of the day, following the portions and the rule of the Harvard healthy dish.
A useful strategy is to also supplement 6-10 g of EAA (essential amino acids) per day. They are people used to eating little protein! Inserting a small portion of it at each meal (even snacks) can help a lot.
The support of a supplement such as creatine can also help. There are several studies that have shown beneficial effects of creatine in terms of aging, for its anti-catabolic role (in the absence of physical exercise) and for the benefits also at the brain level (creatine is a real nourishment for the brain).

Obviously, in all the contexts mentioned above, the food plan must be evaluated by the doctor specialized in nutrition or by the nutritionist biologist or by the dietitian, in a personalized way, based on the state of health, objectives and lifestyle of the user.

In summary, proteins are an important macronutrient, they should not be demonized but not even increased without ratio or excessively in unsuitable contexts.
When we talk about proteins we cannot but talk about muscle mass, the latter has a fundamental role on the physiology and state of health of an individual.